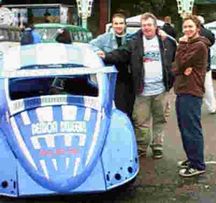 Ca$hback was probably the cheapest VW Beetle drag racer ever built.
Thats cheap on CO$T not cheap on quality, with the car being built from parts and labour donated from some of the largest names in the UK VW scene at the time, along with many equally enthusiastic individuals, all of whom have made project Ca$hback possible.